Almost exactly two years ago now (man, this blog's been around for a spell or two), I wrote about my experience creating my own DIY/potentially lethal voice over booth. It was very early in my career, and my method primarily consisted of throwing acoustically-deadened things against the wall to see if any of them stuck. Turns out two years later that method hasn't changed much.

However, within those two cycles of the Earth playing I'm-not-touching-you with the sun, I have learned a few things about the process of preparing a space for recording. It should be noted I am not the world's leading expert on designing personal recording spaces; I am merely an indie voice actor who repeated the agonizing ritual of rearranging his room until it worked. However, it does work, which means we can analyze my creation process to find out what makes it tick.

If you want both nitties and gritties on the fundamentals of putting together your own booth, you should read the aforementioned article, as this article will assume you already know the difference between “soundproofing” and “sound absorbing.” If you've already read that part and you're tapping your foot waiting for me to get on with it, let's start with some pictures of my current booth: 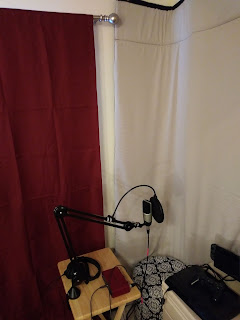 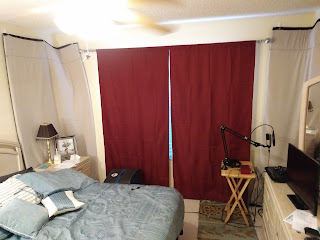 Behold, the fabled Wall of No Acoustics! 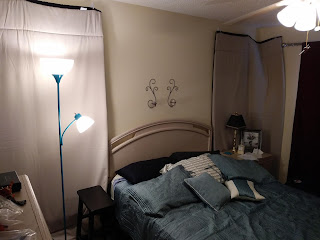 If you're sleeping without oppressive sound sheets hanging on either side of your bed, YOU'RE SLEEPING WRONG.


Let's Tarantino this investigation by starting at the end and then doubling back to an earlier point. Back when I lived in Indiana, I was able to turn my entire bedroom into my voice over booth. I felt like a lowborn minion who had just accidentally stumbled upon omnipotent power. It was wonderful. No more hiding under a blanket in a corner, slowly dissolving into a puddle of perspiration, wondering if success as a voice actor was really worth heatstroke.

My booth in Chicago was hiding under a blanket and dissolving into a puddle of perspiration. To summarize my riveting month-and-a-half stay in Chicago, I didn't ensure to the best of my ability that the house I was moving into was even fit for recording, and the cheap, paper-thin windows a stone's throw from downtown meant I might as well have moved in with a 24/7 marching band. (Also, I'm roughly six-and-a-half feet tall, and the room was likewise only six-and-a-half feet tall, so you can do the math to discover another perpetrator of my frustration.)

Eventually I made the decision to retreat to Florida with my parents, and I had to go through one of my least favorite things in the world all over again, which is designing a voice over booth. Every house, every single one, is like a brand new riddle, taunting you by promising the answer is easy but just out of reach. They're all designed differently, the neighborhoods are all different from one another, the climate itself may have changed depending on what region you moved to. (In Florida's case, it's a coin toss whether or not heaven's floodgates open and drown your recording with the angry FSSSSHHHH of two billion raindrops, right before going back to bright and sunny like nothing happened.) Once again, I had to figure out how to MacGyver a professional-grade voice acting booth using thick curtains, strategic positioning, and knowing MacGyver, probably a mullet and industrial-strength duct tape.

(Note: no duct tape was used in the creation of my most recent booth. No mullets either.)

Let's note the construction and position of my new booth. Unable to fit all eight Audimute sound sheets in my car while driving from Chicago to Florida (as well as a large number of other things a man should have), I had to sell four, meaning I didn't have the resources to turn my entire bedroom into a booth as in Indiana. I had to pick and choose where those sheets would go. Turns out I actually only hung up three. I placed my booth in the corner so I could wrap a single sheet around it, effectively hemming it in on two sides rather than just placing it in the middle of the wall where it only bears the benefit of one. A second Audimute sheet mirrors the first on the opposite side of the room, thereby potentially granting it sound absorption on a third side, albeit from five paces (or three if you're me and walk faster than everyone else jogs). For good measure, I hung the third on the other side of my bed just to deaden that side of the room.

Finally, what isn't fully pictured is the little fact that my booth is right beside a window to the sunbathed/hurricane-wracked outer world of Florida. NOTE TO ANYONE WHO MIGHT BE CURIOUS: THIS IS NORMALLY A BAD IDEA. However, if you've no other choice, you can make it work, as I have. I hung up two blackout curtains (not to be confused with the Audimute sheets) to further deaden the acoustics over the window and block some outside noise. It doesn't totally mute the sounds of Gregory the Ex-Convict working off his probation by mowing my neighbor's lawn, nor the pitter-patter of Florida's indecisive rain system, but the booth now works.

Now, let us examine why such a setup works at all. We'll summarize what I've learned between Chicago and Florida in several points, then discuss how they all work to allow me to record semi-comfortably.

1 – If you don't have some professionally-made portable booth manufactured from big companies employing people infinitely smarter than I am, you will probably need to try numerous approaches before your booth actually works. This means different rooms, angles, and materials until the aneurysm-inducing Rubik's cube of booth construction falls into place.

2 – The quality of the windows all throughout the house directly correlates with how much work you'll have to put in to soundproof your recording space. If you live in a small, sort of rundown house just outside of downtown Chicago and the windows might as well not even exist, you're going to get tons of outside noise to contend with. If you live in a sleek, modern Floridian house with thick, insulated windows, you can literally have your booth right beside it and get along fine. (But you should still try and have your booth near the center of the house and away from windows.)

3 – You do not necessarily have to hide under a blanket, rearrange your entire room, or construct a thunderdome made of moving sheets to have a working booth. If you're resourceful and desperate/angry enough, you can cheat life by focusing on quantity over quality and just deadening parts of the room until finally your voice stops bouncing around it and focuses on the microphone.

4 – To this end, anything both thick and soft is a godsend when creating your recording space. Moving blankets are a popular option; the Audimute sheets I keep referencing have grommets on the tops and bottoms specifically to hang on walls, but this convenience aside, regular moving blankets should work and they're far cheaper if you can find a way to hang them.

5 – I read somewhere that you should have your microphone facing the closest side that's been acoustically deadened. After all, if your microphone's “ear” only “hears” in one direction (as opposed to two-directional or omni-directional microphones), you want it pointing toward the side with the best acoustics. My new booth follows this reasoning, and it seems to get along fine.

6 – Corners are fiends. If you can cover them up with your thick sheets, you can help reduce a lot of that annoying reverberation. Target them!

7 – Be aware of light fixtures. Your voice can get caught up in them and produce a high-pitched, tinny sort of reverb if your booth isn't treated well enough. You might find a way to cover them up, or you could just maniacally hang sheets on every wall until your room gives up and submits anyway. This is what I have done. Let it never be said James does things halfway.

8- Cover up windows with blackout curtains, even if your booth isn't close to one. It will help reduce outside noise and further lessen reverb.

9 – The more populated the room is, the less reverb it's going to have. A room that's completely empty sounds like a cathedral chapel. A room with furniture and decorations everywhere may not be completely ready for voice over, but it'll sound much better than going, “James Wolven, take one one one one...”

10 – Corners are easier in general to put your booth in, creating a sort of hidey-hole away from acoustics bouncing around the room, provided you cover them up adequately.

My room has plenty of furniture, including a king-sized bed, a dresser, a wardrobe, and a couple of end tables. Therefore, it is plenty populated. I placed my booth in the corner to give it that “hidey-hole” status, wrapping one Audimute sheet around on both walls touching the recording space. The blackout curtains over the window and the second sheet hung on the opposite side of the wall effectively deadened a fourth of my room. I remember at this point, this was almost enough for me to call it a day and start recording, but I was still getting some reverb on louder or higher vocalizations. To power through the acoustics, I simply hung up another sheet on the other side of my bed, creating yet another place my voice cannot bounce off of. I have once again crafted a perfectly suitable voice over booth out of an entire room, this time using even less than before.

Is it flawless? Ha ha, nope. I don't even have a chair to sit on, just some sort of weird plush barrel that came with the room. I still have to climb into and out of the booth, somewhat echoing my Coffin in days gone by. Greg the Ex-Convict still has forty-two days left on his community service. My mom and dad have a beautiful, massive walk-in closet on the other end of the house and they won't let me use it. I have contemplated quietly smothering them in their sleep and taking it by force, but paying for the house on my own poses its own risks and having to answer why my parents have been missing so much work gets complicated.

But I digress. Consider this another window into a poor plebeian's need to create a recording space. I'm ruminating over the benefits of creating an industry-wide survey on what other kinds of booths exist, how everyone, from those in the big leagues to those just getting started, are getting that professional sound quality. Be a part of it, stick around and spread the word that AVA is the number two stop for voice over education via articles and interviews! (Voice Acting Mastery with Crispin Freeman is number one, and I won't even pretend to take that from him.)

Thanks for reading. How does your own booth look? Still putting it together, or do you have it nailed down? Let us know in the comments!
Email ThisBlogThis!Share to TwitterShare to FacebookShare to Pinterest
Labels: article, home studio

Pick a subject and dive in